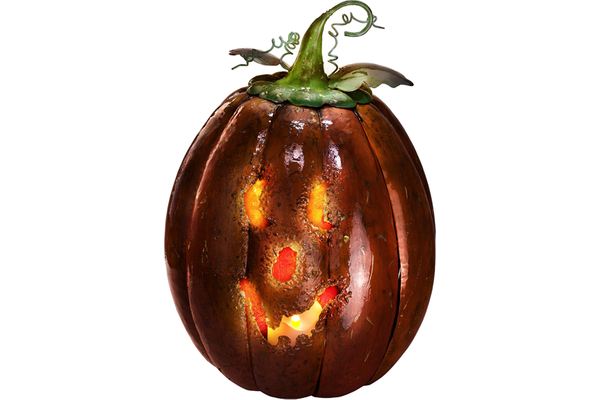 Buy From Retailer
Sold By: The Garden Furniture Centre Ltd

Jack O’ Lantern – large … Based on the famous Irish myth … Jack O’ Lanterns are based on an Irish myth about a man called Stingy Jack who after flirting with the Devil throughout his life was not allowed into heaven when he died but instead was sent off into the dark night with only a burning coal to light his way.

As the myth goes Stingy Jack put the burning coal into a carved out pumpkin and has been roaming the earth ever since.

And so the saying, ‘Jack Of The Lantern,’ or the shortened, ‘Jack O’ Lantern,’ came about.

You learn something new every day! We also sell small and medium Jacks.

The candle is not included.

Place a candle in the centre and light up the authentic facial features in the same way as you would with a pumpkin.

Hand made from recycled shipping drums and other upcycled metals making them helpful to the environment as well.

Finished with tough lacquer paint which is applied by hand and won’t melt with the heat.

Additional options available for this product:

If you need assistance when looking to buy Jack O Lantern Large which is a fantastic Lanterns, then please do not hesitate to get in touch.